Electric Jaguar Hits the Road in 2013 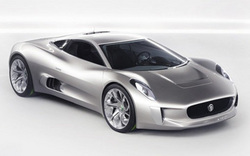 It wasn’t long ago when Jaguar presented its C-X75 electric supercar as a concept at the 2010 Paris Motor Show. Now the company says the car’s going into production, hitting the streets in 2013.

If you missed its rollout as a concept car, here’s a quick review: This thing is a monster. It’s a plug-in hybrid electric car that works like the Chevy Volt, running on electric power that’s replenished by a gasoline engine. But that’s where the similarity ends.

This road rocket has a 145kW electric motor on each wheel, powering it from 0 to 60 mph in less than 3 seconds with a top speed of at least 200 mph. According to Top Gear, those motors are expected to generate roughly 800 horsepower.

When it runs out of battery power (after traveling about 30 miles), the car’s batteries are recharged by a turbocharged four-cylinder gasoline engine. Unfortunately, the twin micro-jet engines that recharged the concept car didn’t quite make it into the production model, but Top Gear says, “the fiery cannons of goodness might make it into a later section of the production run.” See what the twin microturbines look like through the rear window in the gallery below.

Want one? The lowest estimated price we’ve seen for the Jaguar C-X75 is in the neighborhood of $1.1 million. Snap one up quick when 2013 rolls around, because Jaguar is only making 250 of them.